The kitchen is one of the most important rooms or spaces in any home because of its functionality and role in bringing family members together. When building the kitchen, one needs to make sure that the design and the layout of the kitchen are good enough to meet up to its functions and at the same time have a great appearance.

Today we’ll be taking a look at one of such designs that features the kitchen as a home addition which creates a connection between a houses’s interior and outdoor areas.

An architecture firm called Benn+Pinna worked on this home addition project to a small house in Sydney, Australia.

The kitchen features a dining area on the interior side and a BBQ grill in the outdoor area or courtyard which also doubles as a lounge for reading or relaxing with friends. Both sides are separated by a foldable glass door and a continuous wooden kitchen cabinet at the bottom extends seamlessly from the interior into the courtyard.

Not only is the design beautiful and minimalistic it makes the most of the space available and can accommodate guests for a nice and formal dinner or an outdoor BBQ party. This kind of setup has made the homeowners very happy and if your house is the kind that can make such a layout work well then you might want to consider it too.

Amazing Transformation: See how this Graffiti Kitchen was Turned into an Award-Winning Space 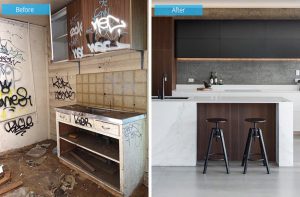 After a while, a home space can become aged and lose its lustre, in the worst-case scenario, it may even be damaged, unpresentable, and rendered non-functional. Usually, this is a good indication that there is some need for renovation and we’ve seen a lot of homes go through this cycle of transformation.

Today we’ll be taking a look at one of such examples of a kitchen belonging to a previously dilapidated house built back in 1920 and located in Sydney, Australia.

After several years of being used by squatters and the homeless, this house was bought over by a new owner, and the kitchen was renovated by Minosa Design, transforming it from a graffiti-laden and dirty horror to a beautiful and award-winning space with a sleek and functional design that features a hidden laundry.

A tremendous deal of cleaning and renovation had to be done to get rid of all the garbage and graffiti left behind by those who squatted in this house and the transformation has left it completely unrecognizable from its previous state.

The kitchen now features new furniture, fixtures, and equipment that replace the previously damaged ones and a perfect mix of patterns, designs, and aesthetics from the variety of materials such as stone and wood that was used for its facelift.

With a brand new and ultra-modern design that makes the most of the available space, it would no doubt win an award for the best-transformed kitchen making anyone privileged to be the homeowner very happy. 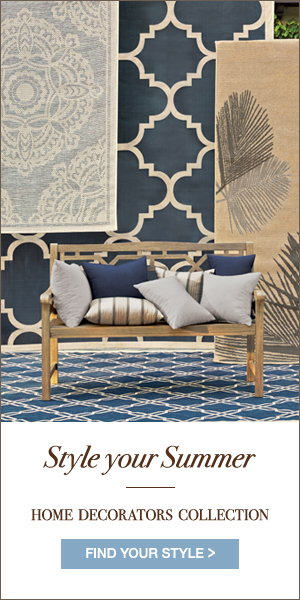 A Guide to Buying the Perfect Bathroom Sink